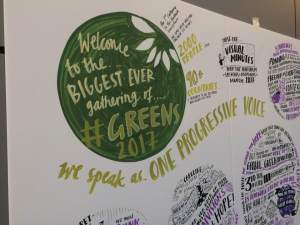 A well organised and largely united Green Party of England and Wales ( GPEW) Spring Conference took an important step forward for the party, and the wider left, last weekend. Taking place in Liverpool, in conjunction with the largest ever gathering of Global Greens, Conference endorsed the initiative of the party leadership to try and  build alliances with other parties in advance of the next general election, with the aim of removing the current government and replacing it with a coalition with a primary commitment to introducing proportional representation.

At a packed fringe meeting ahead of the vote, with the title  ‘ Progressive Alliances in the UK ‘  Caroline Lucas predicted that unless Greens united with others to achieve electoral reform we faced the prospect of at least 20 years of majority Tory governments. If such alliances, agreed and organised at local level, wanted to also campaign together on other issues, eg in defence of local services, then so much the better.

Jonathan Porritt reminded us that as well as talking with other politicians and activists we also needed to reach out to people who had not previously been involved in party politics. We needed progressive alliances to allow the Green Party to come out of the political wilderness. Realistically, in the here and now, they were the only mechanism by which we can fight the rule of the elite. The Green Party needed to show the extraordinary leadership needed to step up in favour of electoral alliances.

Andrea Frieze had been the prospective Green Party candidate in the recent Richmond Park by-election. She was anxious to stress that she hadn’t  stepped down in that election by not getting herself on the ballot paper. Rather she had stepped up in favour of an electoral alliance. It had achieved its objective of getting rid of a Tory MP, and would continue at the local elections in 2018, with the aim of getting rid of the Tory majority on the council and getting more Greens elected. Although ‘ Targeting to Win’ was a tried and tested strategy we cannot wait for it to succeed across the country she said. The situation is dire and we need to cooperate with others in order to achieve power. At the next General Election we might end up standing in only a handful of seats, where we could have a chance of being elected.

Tommy Shepherd MP said he was the first SNP member to speak at a Green Party Conference. The SNP remained committed to PR even though the vagaries of the first past the post system had  worked to their advantage at the last general election. The 2014 referendum was the greatest modern example of a Progressive Alliance. Supporters of the Yes campaign worked together without even knowing which party, if any, activists belonged to or supported.

Neal Lawson from Compass said he was a green, liberal socialist who wanted to work with greens, liberals and socialists to achieve a better society. He thought the Labour Party’s attitude to PR was changing and that the attitude of the Green Party towards the Labour Party can help change it further and faster. 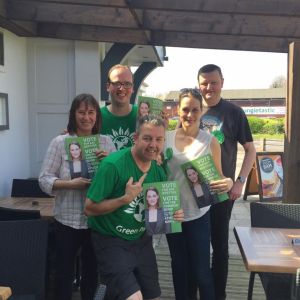 All of us in every progressive movement had to unite to defeat the Evil Empire and to change our political society. Progressive Alliances were meeting points for those who believe the best in others. We needed to make hope possible rather than despair convincing.

The motion debated at conference ( moved by High Peak member Mike Shipley, in his capacity as chair of GPRC) referred to electoral alliances rather than progressive ones. It had been carefully worded, after extensive discussions between the co-leaders and the two national governance committees, the executive ( GPEX) and the regional council ( GPRC). There was a recognition of the fact that many Green Party members would find it difficult to recognise the Liberal Democrats and/or Labour as progressive, and that the primary aim was to achieve electoral reform. The motion ( see below ) stressed that the initiative for forming alliances rested with local parties. The national party would advise but not instruct. Local parties should only contemplate making alliances with those with whom they shared values in common, ruling out any alliance with UKIP for example, despite their interest in electoral reform.

Two friendly amendments were included in the final motion, removing the assumption that alliances would only be negotiated in a minority of constituencies and committing the national party to actively promote electoral alliances when local parties had voted in favour of one.

The motion was overwhelmingly carried with probably between 5 and 10% of the several hundred members in the hall voting against.

In recognition of the democratic deficit in the UK whereby a Party polling a minority of the popular vote in General Elections are able to command a Commons majority and form a Government, in 2015 GPEW committed to campaign by all legitimate and peaceful means in favour of Proportional Representation.

Following the commitment made by the Green Party of England and Wales  to campaign by all legitimate and peaceful means in favour of Proportional Representation (PR) for elections at all levels of government, Conference seeks to enable the formation, where appropriate, of Parliamentary electoral alliances for PR.

In pursuit of this policy, Conference calls on GPEx, GPRC, WGPC and local Green Parties to work in cooperation to ensure that any electoral alliance entered into is in the best interests of the Green Party of England and Wales.

All final agreements must be ratified by a vote of all local parties in the constituency involved. If the selection of a Parliamentary candidate by a local party would normally require a ballot of the full local party membership, then this will also be the case for ratifying an electoral alliance for that constituency.