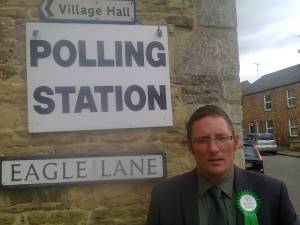 2016 was the year of rising nationalism and populism. The outcome of the Brexit referendum and Donald Trump’s victory in the US elections shocked us all. Now more than ever we have to stand up for our Green values. Let us turn 2017 into the year of fighting these reactionary tendencies. Let us fight for pluralism, diversity, solidarity, public services and a clean and healthy environment. The fight starts locally.  Would you consider standing as a candidate in the County Council Elections?

The Greens have always and will continue to be the natural antidote to populists and nationalists. Hence, we can and should play an important role in opposing the Conservatives and UKIP.  The Greens have always been the political party that is fighting against racial and religious discrimination, for gender equality and LGBTIQA+ rights. This is a core element of our Green identity. Fighting discrimination is not merely about protecting minorities, it is also an important contribution to an open and inclusive society. We believe in a culture of solidarity, which is open to migration and takes responsibility for people fleeing war or persecution. We want immigration laws instead of walls and fences. We stand for local co-operation and for global multilateralism.

Since 2008/09 Northamptonshire County Council has cut more than one quarter of a billion pounds from County Council spending, with dyer consequences for council services and local people. They have reduced their staffing levels from 17,000 to a few thousand, and are on course for less than 500 staff by the end of the decade.  Northamptonshire has turned off speed cameras and removed half of the street lighting in the county making many urban areas much less safe for local pedestrians and drivers.  They have radically reduced funding for more affordable ‘prevention’ and low level support services, and taken nearly £50 million from Adult Social Care and Children’s Services with devastating consequences for local people and the NHS.

Many of us are appalled by these actions and have spoken up but to little avail.  With the Conservative’s considerable majority in the Council they can afford to ignore even the most constructive of suggestions from politicians, residents or professionals, and they regularly do.  Would you consider standing as a candidate in the County Council Elections?

On Monday 20th February Northamptonshire Green Party are holing a meeting to give people the opportunity to understand why the Green Party tries to stand candidates at Council elections and what procedures are involved to get your name on the ballot. We will be looking for candidates from across the County, and it would be great to see you there, if you think you might be interested in putting your name forward in the area where you live. This meeting is for Green Party members only in Northamptonshire and the East Midlands.  The meeting starts at 7pm and finishes at 9pm in the Doddridge Centre, St James, Northampton. NN5 5HF

One thought on “Standing as a Candidate”